Timing matters when submitting an Inventor Oath or Declaration

U.S. law requires that each inventor or joint inventor of a claimed invention in a patent application execute an oath or declaration in connection with the application, stating: 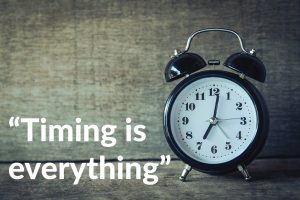 Frequently, these inventor signatures are easy to obtain and can be filed at any time during prosecution of the application.  Sometimes, however, an application is allowed before the oath or declaration is on file.  What happens then?

Notice of Allowance Issued. What now?

The requirement that an inventor oath or declaration be submitted before payment of the issue fee is statutory and, since September 2012, is applicable to U.S. national applications as well as U.S. national stage entries of PCT applications.[2]

The submission of an oath or declaration used to be required much earlier during prosecution.  Under AIA rules enacted in 2012, the law was changed to allow submission as late as with the payment of the issue fee.  However, it can be very risky to wait that long because if that oath or declaration is rejected for any reason and the issue fee has been paid, then the case goes abandoned.

If the oath or declaration is not available at the time the issue fee is due, a continuation application can be filed to maintain pendency; the instant application will then lapse.

What about a Request for Continued Examination?

Importantly, in U.S. national-stage (§ 371) applications, filing a Request for Continued Examination (RCE) to maintain pendency when an oath or declaration cannot be timely filed is not an available option since U.S. rules do not permit the filing of an RCE in such applications until the application is in compliance with all U.S. national-stage requirements, including submission of the oaths/declarations from all inventors.[3]

As a preventative measure, it is recommended that an applicant consider submitting inventor declarations during the PCT stage for cases in which U.S. nationalization will be sought (this corresponds to Box No. VIII(iv) of the PCT Request form.)

As the old adage says, “timing is everything.”  Although alternatives are available if an application goes abandoned because of a missing signature, the best (and most cost-effective) practice is to submit the oath or declaration at the time of filing a patent application, or as soon as possible thereafter.

For more tips and tricks like this, visit the MMVIP Blog page.

Filing An Assignment And Oath/Declaration For A Deceased Inventor

How can we help you?