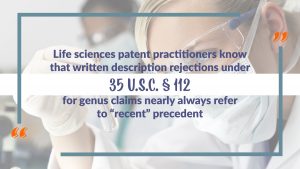 Life sciences patent practitioners know that written description rejections under 35 U.S.C. § 112 for genus claims nearly always refer to “recent” precedent including Regents of the University of California v. Eli Lilly & Co. (1997)1, University of Rochester v. G.D. Searle & Co. (2004)2  and Enzo Biochem, Inc. v. Gen-Probe, Inc. (2002).3 While the core holdings from these cases, requiring either disclosure of i) a representative number of species or ii) disclosure of or knowledge in the art of a common feature possessed by all members of the genus, is still the law for some generic inventions, the United States Patent and Trademark Office (USPTO) frequently misapplies the precedent or applies it out of context of the invention being examined.

Specifically, the USPTO’s reliance on the above precedent is often misplaced because it

Addressing “possession” requires a consideration of the collective knowledge in the art combined with the specification, which is a factual inquiry the USPTO rarely undertakes in a meaningful way.  But because written description is a question of fact, such rejection can often be overcome by either providing factual evidence supporting possession, or reminding the USPTO of its burden to establish why a person of ordinary skill would not view the Applicant to have possession.  Indeed, for generic claims, the Federal Circuit has set forth a number of factors for evaluating the adequacy of the disclosure, including “the existing knowledge in the particular field, the extent and content of the prior art, the maturity of the science or technology, [and] the predictability of the aspect at issue.”4

While knowledge in the art cannot completely supplant the requirement for adequate disclosure in the specification, it can fill important gaps, such as rebutting unpredictability, or establishing that the genus is not as large and diverse as alleged, such that the disclosure is representative.   As one example, when claiming use of a genus of enzymes having a certain function, Applicants can use evidence from curated genetic databases to show that other enzymes having such function existed, and that structures critical to function (such as the active site) were known to skilled artisans.

Moreover, not all situations require meeting the representative number of species or a structure/function correlation.  “An adequate written description requires a precise definition, such as by structure, formula, chemical name, physical properties, or other properties, of species falling within the genus sufficient to distinguish the genus from other materials.”5  Likewise, the Office should be reminded that the requirement for a representative number of species is an alternative test to disclosing of a structure/function correlation, and that both are not required.  When there is a structural feature required by all claims, typically needed to support functional claims, there is no requirement for a representative number of species.  The common structure is by itself sufficient to permit a skilled artisan to visualize or recognize the members of the genus.

For inventions that are combinations of known elements, and not novel elements, Applicants can rely on the line of precedent that holds that description of what is known is not required (and preferably, omitted) from the specification.  For example, in Capon v. Eshhar,6 the invention was to a combination of known nucleotide sequences, i.e., chimeric genes, not to the novel sequences.  The court relied on the different context to distinguish the invention from Eli Lilly:

The “written description” requirement must be applied in the context of the particular invention and the state of the knowledge. The Board’s rule that the nucleotide sequences of the chimeric genes must be fully presented, although the nucleotide sequences of the component DNA are known, is an inappropriate generalization. When the prior art includes the nucleotide information, precedent does not set a per se rule that the information must be determined afresh. Both parties state that a person experienced in the field of this invention would know that these known DNA segments would retain their DNA sequences when linked by known methods. Both parties explain that their invention is not in discovering which DNA segments are related to the immune response, for that is in the prior art, but in the novel combination of the DNA segments to achieve a novel result.

Although the Federal Circuit stated in 2011 that “[t]he test for written description is the same whether the claim is to a novel compound or a novel combination of known elements,”7 that case turned on the fact that few species of the claimed genus of analogs were known in the art, and the ones that were known did not have the recited function.

Disclose as many embodiments having a claimed function as possible to avoid the Rochester precedent in which the specification lacked a single disclosed embodiment having the recited activity.  For solely functional claims, make sure to include structure correlations in the specification, or in a reference incorporated into the specification.  Also try to specifically disclose a narrower sub-genus, if possible.

Be familiar with the precedent applicable to the specific invention and draft accordingly.  For example, include information that can be used to limit the size of the genus or support predictability.

Include at least one, and preferably more than one working examples.  The precedent touting that there is no requirement for working examples rarely applies in life sciences inventions.

Finally, it is inadvisable to add statements in the specification suggesting that aspects of the invention remain under investigation.  These statements have been used against patentee in litigation as contradicting information that the patentee is asserting is well known.10