History of Patents in Skiing Industry 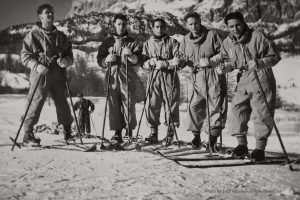 Historically, people have shown an interest in snow sports, specifically skiing. In fact, the oldest skis date all the way back to 6000 B.C.E. when ancient skis were found in Russia.

During the 19th and 20th centuries skiing evolved into more of a recreational activity.

For example, in 1905 in Sweden, the first official slalom race took place. Around this time the first designs and patents for skiing were published, but it was not until the late 1980s when companies started investing into perfecting the way the skis looked and worked. The first contemporary (Alpine) design of skis with deep-side cuts, giving the ski an hourglass shape, was invented by Elan in the late 1980s:

In the 1990s, companies quickly followed with improving the design of Alpine (downhill) skis by making the line of the skis narrower in the middle (parabolic shape). Below is a Rossignol patent from 1992 for a patent of such parabolic-style Alpine skis, which incorporated reinforcement elements (48, 58) to “ensure perfect transmission of the forces from the edges to the upper face of the ski”: 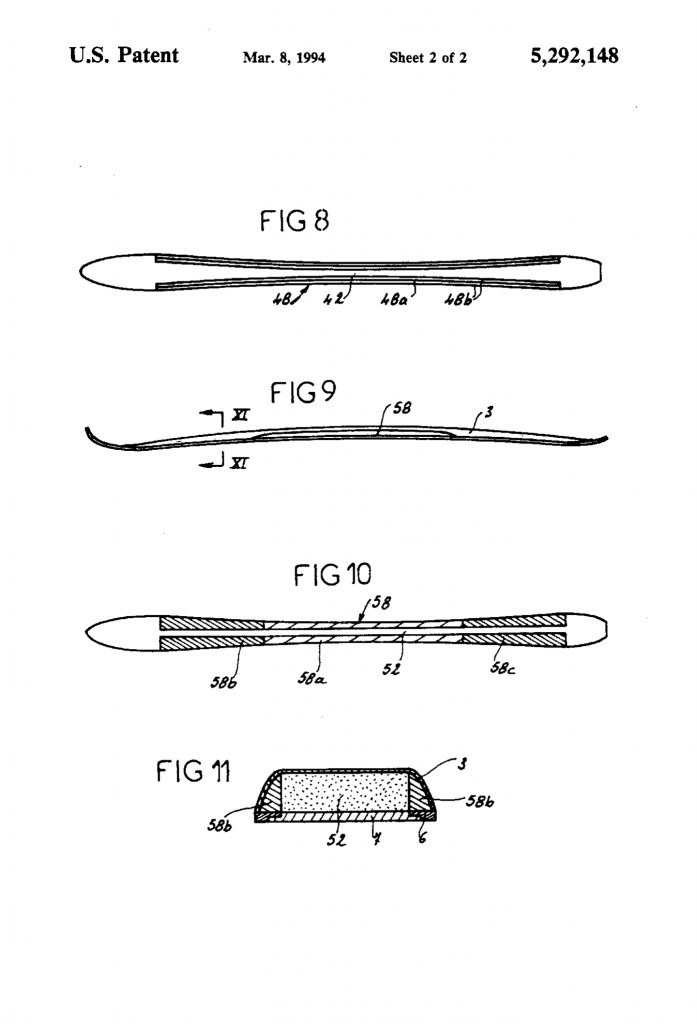 Since then, skiing has become a vibrant and popular winter sport, with revenues of approximately 20 billion US dollars each year. (www.cnbc.com) Companies, therefore, invested into ski equipment patents and designs in increasingly larger numbers.

Although, the actual skis account for the largest portion of core ski equipment patents making up about 40% of the overall patents, there are also patents that cover bindings, poles, and boots.

The patent filing rates began rising in 1960s with the invention of ski bindings. This event accelerated manufacturers such as Rossignol Group, K2 Sports and Amer Sports to start patenting their technology, which catapulted these companies to the forefront of the skiing industry. The rest then followed.

The bulk of skiing equipment patents were filed during the 1990s. Although there have not been many patented breakthroughs since, it does not mean that there was no innovation happening; the innovation of last few decades was predominantly focused on other areas, such as helmets, goggles and ski trackers.

The resurgence of innovation in ski goggles has encouraged an increase in skiing-related patents. With the use of Heads-Up Display (HUD) in ski goggles, skiers have now the opportunity to take their enjoyment on the ski slopes a little bit further. Take Oakley Airwave goggles for example. These high-tech goggles provide skiers with connection to real time information like temperature, speed, playlists and maps.

There is also a friend tracker which you can access to locate your friends on the ski slope and a map of 600 ski resorts found all over the world. These goggles also allow you to make phone calls, send texts and stream music.

These emerging technologies in the ski wear represent a small portion of the future of innovation in skiing.


innovation intellectual property patent patent law skiing winter
How can we help you?