In observance of Memorial Day this weekend, MMWV would like to extend an enormous thank you to those that have made the ultimate sacrifice in service to our country and its citizens.

The observation of Memorial Day was federally observed in 1971, however it dates back further to immediately after the Civil War where both the Union and Confederate armies formed their own ceremonies to observe their fallen comrades. Usually called Decoration Day, by the end of the 19th century, the tributes took place typically on May 30th. Although Memorial Day is now observed on the last Monday in May, the origin of these types of ceremonies can be traced back to the Ancient Greeks in Athens when Pericles honored the fallen soldiers of the Peloponnesian War.1

As a country, we observe this day by spending time with our families and marking the beginnings of our Summer activities with barbecues and pool openings. Below is a brief look at the innovation and technology that went into making our Memorial Day festivities what they are. 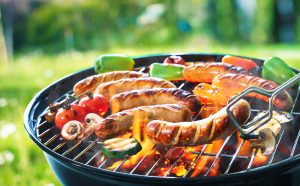 The origins of the barbecue grill (grill) date back to the 17th century with the Arawak Tribe, when they cooked their meat over an open flame with a stick. This was called barbacoa (a type of meat that can be found at Chipotle). One of the earliest grills, as we know them, dates back to 1938 and was created by Herbert G. Simmons (U.S. 2,120,683). The grill is conical in shape and came complete with an ash catcher at the bottom.

Propane grills were not invented until the 1960s, when William G. Wepfer and Melton Lancaster were trying to encourage customers to buy more natural gas.2  Barbecue grilling is now not only for the family, but a commercialized and at times competitive aspect of our Country’s culture.

In 1897, Ellsworth B. A. Zwoyer patented his design for a charcoal briquette (U.S. D27,483), although frequently the more commonly known Kingsford Products Company is credited with the innovation.   The size and shape of the briquettes allow them to burn steadily and consistently while you are grilling.

Pools have been around for thousands of years. Generally accepted as the earliest public water pool, the “Great Bath” at Mohenjo-daro dates to 3,000 B.C.E. However, the earliest patented swimming pool is an above-ground pool that was invented by James P. Hooper in the late 1920s and patented in 1930 (U.S. 1,736,613). This free-standing pool was invented to allow a majority of families to afford a pool with cheaper construction than in-ground pools and allowed for portability. This particular type of pool could be placed on grass, in basements, or any other type of floor and was resistant to mildew.